The Hand Made African String Instruments

By 2003 I had been doing Blues In The Schools presentations for several years. I had always made a point to tell the kids that the origin of the Blues was steeped in the tribal music and culture of West Africa. I decided to do some research on the African instruments played by the Griots and Jelis (traditional African musicians), so I could demonstrate to the kids what these instruments were like.... What I discovered, was to change the direction of my Blues based music for good. 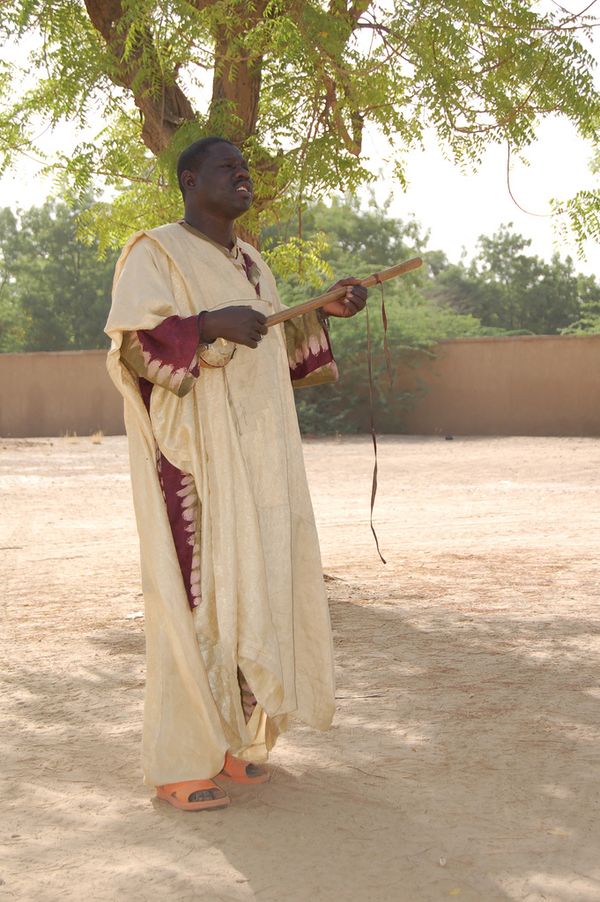 The three principle instruments of the West African Griot were the majestic Kora - a twenty one stinged harp - the humble Ngoni - a 4 or 5 string canoe shaped lute and the very first blues instrument - the Khalam - the workhorse of the Griots and Jelis. 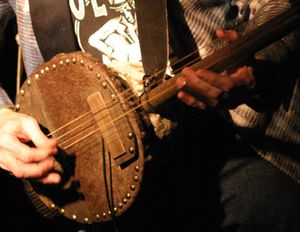 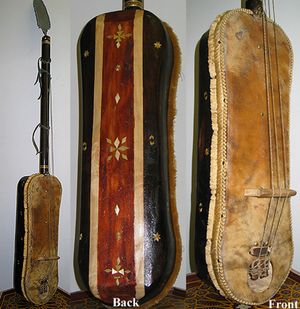 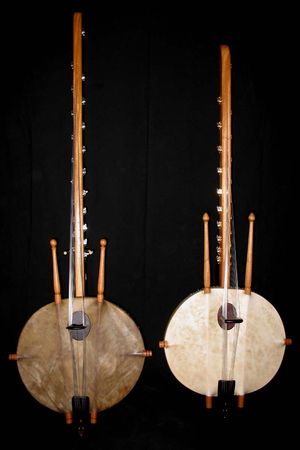 KHALAM                    NGONI                   KORA
I figured that if an African musician in the bush could build a instrument by hand, why couldn't I. I went into my garage found some  pieces of wood, the handle off an old shovel and some discarded guitar parts - old tuners, bridge and such, and built my first diddley bow. The diddley bow or 'jitterbug box' is considered the first American blues instrument and was based on an African lute called a Umakeyana. The single stringed diddley bow was a strand of bailing wire nailed to the side of a cabin or barn. A piece of wood was forced under the wire and a bottleneck or section of metal bar was slid over the wire and was plucked at the same time. The mobil version of the diddley bow - a box and a neck - was called a 'jitterbug box'. The diddley bow was the first instrument of most legendary blues guitarmen like Muddy Waters, Jimmy Rogers, B.B. King, Freddie King, Elmore James, Albert Collins, etc. Unlike the 'cigar box guitar', the diddley bow has no fret board and predates this instrument by a couple hundred years. 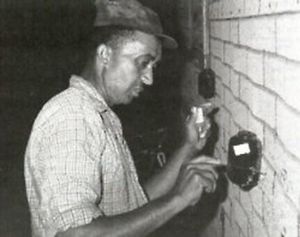 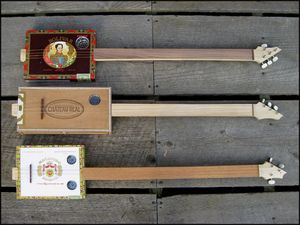 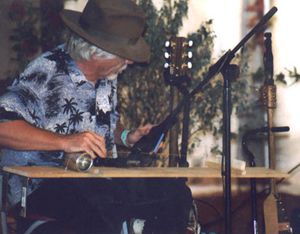 The diddley bow was an instant hit with my BIS presentations. I brought it to a band rehearsal and it immediately became a part of our sound. The Afrosippi Blues was born. I play the diddley bow on the track, "Tangled Road" off the "American Primative" CD and"Blues Hollar #1", off the "Mercy" CD.

I was so pleased with the music I was creating with the diddley bow, that I thought I would give building a Ngoni a shot. I went to 'Pier One' and found the perfect body. A canoe shaped mask from Mali. I used the handle off a broom this time, a mandolin bridge, tuners off of an old Harmoney guitar and a totem head piece from the Mande tribe.  I covered the body in African Ox hide. The Ngoni is a four string instrument tuned to a D,G,D,G. All of these instruments are played with some form of bottle neck. In Africa they use a piece of polished bone. 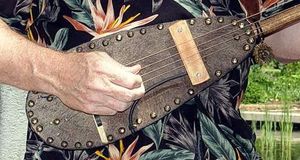 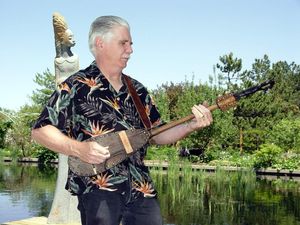 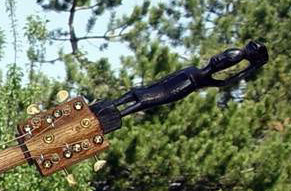 The Ngoni turned our real nice and the sound was better than I had ever hoped for. I wrote several songs that appeared on the "African Wind"  CD using the Ngoni - "Black
Hanna","The Griot Man" and "Lonesome Road".

After experiencing so much success with the diddley bow and Ngoni, I decided to tackle the big daddy of all Griot instruments - the Khalam or African guitar. The Khalam traditionaly has a large, round shaped body, covered in animal hide. It is a six string instrument. It is played with a piece of polished bone or steel pipe. It is usually tuned in a DAD DAD configuration. At times it may be tuned to a high C or a open G or E. The sound is rich and big!

The first thing I had to do was find the right body. I located a wonderful African artist - Salihu Ibrahim - who lives and works in Ghana. Salihu does all of his craving by hand using tools handed down to him by his father. He specializes in the Puna style mask.

"I worked with the chief's head carver for about 15 years, during which time I learned the various styles and techniques of Ashanti and Akwamu traditional methods of wood carving." - Salihu Ibrahim

Puna masks are said to possess anti witchcraft powers and are marked by their distinctive white color. Salihu's mask bodies are perfect for the Khalam. I hand craved the head stock, bridge plate and pickup guard out of oak. The neck is the oak handle off a shovel. The tuners are modern as well as the Gibson humbucker pickup. The bridge is off a acoustic arc top guitar. The body is covered in African Ox hide. The Khalam is the predecessor to the American banjo. This is 'Black Hanna', my first Khalam and my favorite instrument. It has a wonderful sound, both ancient and modern at the same time. 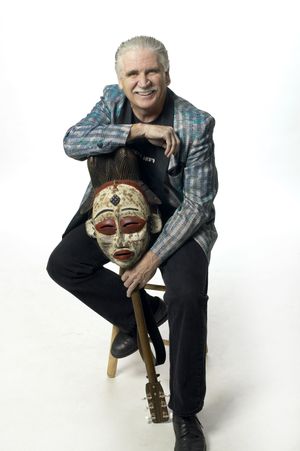 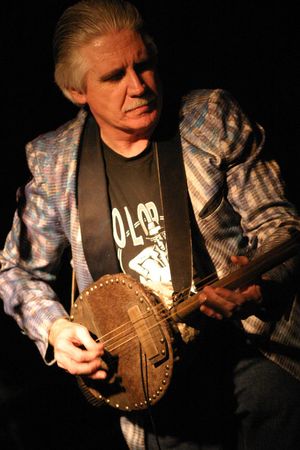 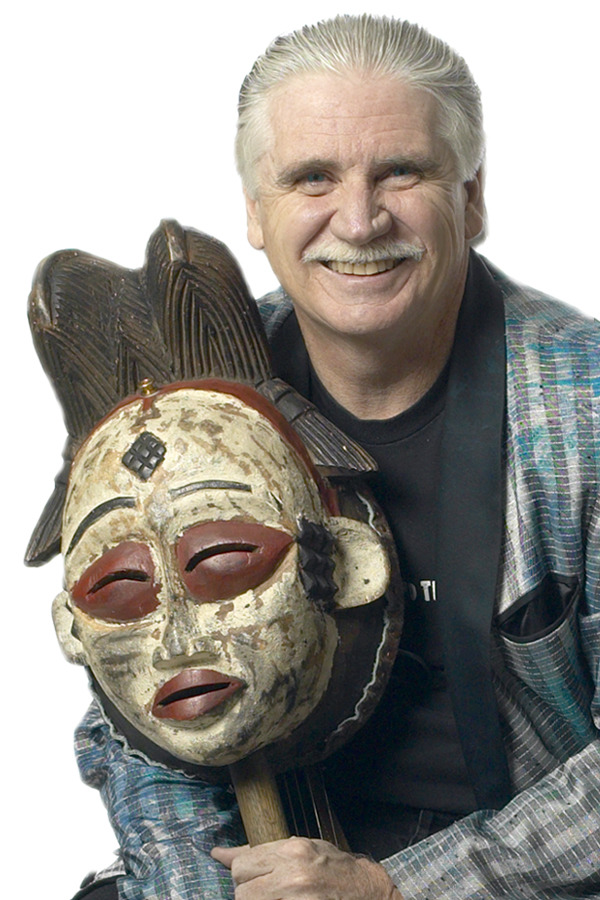 The majority of my original music is based around the sound of this Khalam. All of my most recent CDs feature the music that this Khalam compels me to make. I have made several variations of the diddley bow, and the Khalam, but 'Black Hanna' is still my fave. After seeing me preform with my band, the "Afrosippi Blues Band", in Memphis at the 2009 IBCs, world class guitarist, Nick Schnebelen, of Trampled Under Foot, asked me to build him one. He has since incorporated it into the band's sound.
Discovering the true roots of the Blues in West African music opened up a whole new world of creativity to me. It wouldn't have happened if I had not researched, built and learned to play these instruments. They are what the AFROSIPPI SOUND is all about.